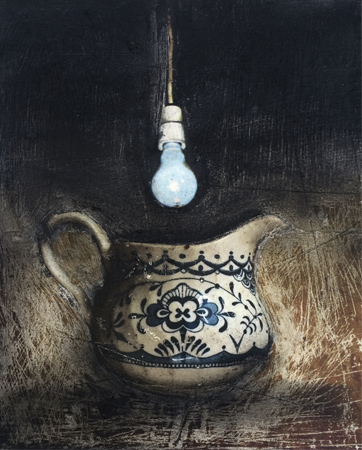 Janet lives and works near Skibbereen in Co.Cork. Her influences are firmly rooted in the landscape of West Cork, making the often invisible visible or at least allowing the viewer a close-up glimpse, exploring notions of the everyday, the often overlooked and the discarded in her rural surroundings. Subjects such as the spiral rubber marks left behind on the roads by the nightly activity of the ‘boy racers’ or a visit to a fish factory, or a field of maize in winter are all worthy subjects being examined in Janet’s work.

She starts a body of work by spending time researching around a subject. An avid photographer, she catalogues her local landscape and elements within a starting point for her studio practice while at the same time drawing her subjects from like as she feels that this connects the hand to the head and gives her a greater understanding and respect for of the subject matter. Notebooks are also an important part of her practice as she uses these to sketch, write down thoughts, ideas and inspirations as the present themselves.

She works mainly with charcoal on a painted background, building up layers of texture and definition by both adding and erasing tone, deconstructing the painting by scratching, placing marks or paint over the entire piece, reworking the piece until that something magic happens in the translation and the relationship of artist and medium which can surpass the original objective.