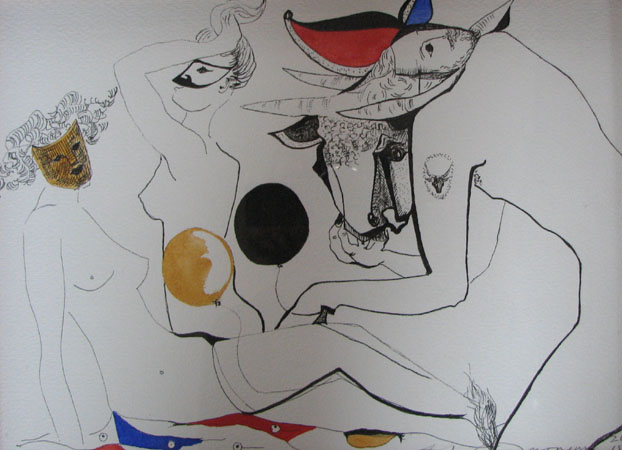 Hammond Journeaux, painter and illustrator, was born in 1964 in New Zealand. She was selected for the Whose Day Book, 1999. She represented Ireland European City of Culture, Cork, 2005.

She has exhibited images inspired by “The Lament of Art O’Laoghaire”, permission granted by Thomas Kinsella, which lead to a series entitled “Red Horses”. She designed the cover of Shop Poetry Magazine Spring 2000, from which followed her “Blue Bulls” sequence of work.

Hammond has exhibited in Germany, Spain, England, and New Zealand, and specialises in collaborating with writers and poets. This has lead to numerous literary magazine contributions, Aquarius,Southword, and Force 10, and book covers for Carcarnet publishing house “The Sound of Light” 1999, “The Return of the Cranes” 2002, John Heath Stubbs and Gallery Press “Homage to Gaia” 2008, Sextus and Cynthia” 2009, Derek Mahon and Souvenir Press, “The Little People of Ireland” 2008, Aine Conor, “Listening to One Language” 2010 Sue Toole.