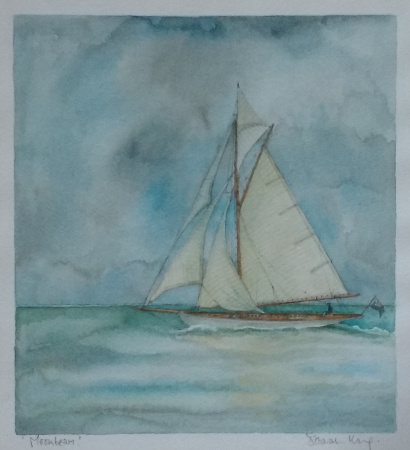 Deborah’s work is featuring in our 2016 Summer Exhibition No’ 2 which opened on 1st July.

Deborah King was born in Dorset and studied at the Hornsey School of Art in London. After working free-lance as an illustrator for several years, her first book, ‘Rook’ was published in 1980 to much critical acclaim, breaking new ground as a non-fiction picture book with an environmental message.

Over the next twenty years, she became an established author with eleven more titles to her name. Published by Random House and Harper Collins, her books achieved several award nominations and numerous worldwide editions. Many of her projects focused on significant ecological and conservation issues and she regularly lectured in London art schools and exhibited her paintings. Her work is in private collections throughout the UK and USA.

Living by the sea for much of her life, her wooden boat became the subject of many of her watercolour studies and international commissions took her to classic boat rallies across the Caribbean and Mediterranean.

Travel to wilderness places has influenced much of her work and after a decade writing and painting on the Atlantic coast of Cornwall, in 2011 she moved west to the Mizen peninsula. From her studio near Rossbrin Cove she is now well placed to continue her interest in marine ecology and maritime heritage. Her recent paintings, incorporating an intricate layering process of translucent tints and glazes of colour, are inspired by the ever changing drama of ocean light across the shores of Roaringwater Bay.