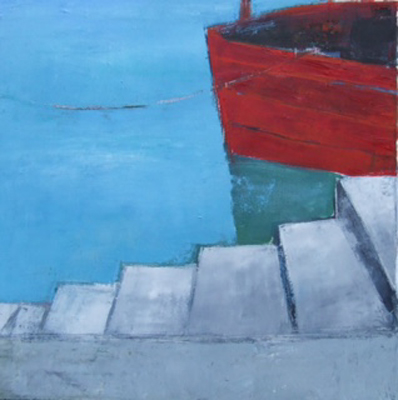 Cormac was born in Cork City, Ireland in 1969, and studied at Sligo RTC from 1987 to 1991. Having acquired a National Diploma in Fine Art he moved to Barcelona, Spain, where he regularly visited the Picasso Art Museum, the Joan Miro Foundation, The Antoni Tapies Foundation and the famous Gaudi buildings. On returning to Ireland he joined other local artists and set up group art studios. He began to exhibit his paintings locally and nationally, and also published art reviews and illustrations in various outlets, including Arts West magazine, Circa, and the Sculpture Society of Ireland newsletter.

Now living in County Leitrim with his family, Cormac has exhibited in numerous solo and group exhibitions in Ireland, the UK and America. He has had artist’s residencies in Vermont, USA, Cill Rialaig Artist’s Retreat, Co Kerry and at Triskel Arts Centre, Cork, and has received a number of awards for his work.

His art is held in many public collections, and in private collections across Ireland, UK, France, Spain, Portugal, Belgium, Germany, USA, Australia and Japan.

“My work explores the atmosphere of place, usually remote areas marked by the elements. I return to certain images over time, reworking the paint, building it up in layers on the surface. Memory and imagination will mix in the final composition, which I hope captures the essence of a fleeting vision.”

The Aisling Art Gallery is proud to launch an exhibition of Cormac’s work at 7pm on Friday 16th September 2016.